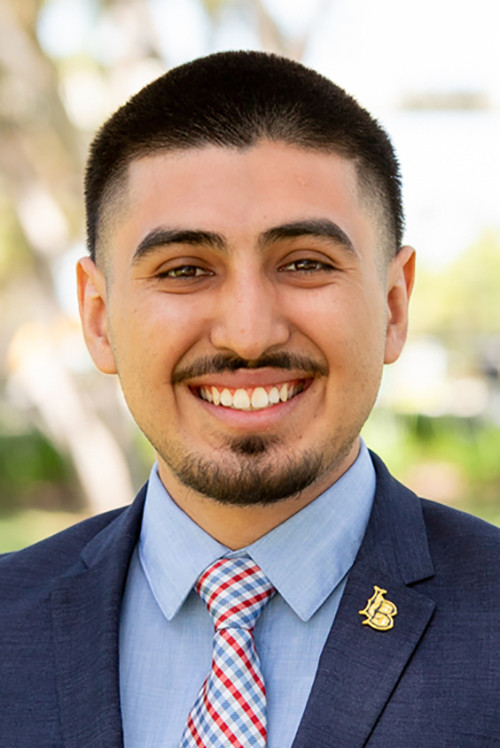 Omar Prudencio Gonzalez is a fourth year political science major with a concentration in law and public policy, and is minoring in sociology. The son of immigrants from Mexico and El Salvador, Omar was born and raised in Los Angeles where he attended high school at Alliance Neuwirth Leadership Academy located in South LA. Remembering his family roots, he set the goal to become the first in his family to receive a college degree. Driven and motivated, his high school experience set him up to be a leader. One example of his commitment to service is made apparent through his community involvement with the Chief of Police Cadets for the Los Angeles Police Department where he worked as the functional supervisor for over 8,000 cadets across the city. Prudencio-Gonzalez also founded the Military Cadet Corps for charter schools in south LA as a leadership resource program for his peers and the community. While in high school Omar also served in ASB, the senior event committee, yearbook and the National Honor Society. Omar officially began his work in advocacy during his senior year, around the time he became heavily involved with the Los Angeles Mayor’s youth council, eventually leading to an internship in the LA Mayor’s Office of Public Engagement.

Since starting at Long Beach State, Omar has been as involved as ever. He began his experience as a front office student assistant and residential mentor during summer bridge programs for incoming freshmen. During his sophomore year, Omar served as ASI Senator/Vice Chair for the Board of Directors and lobbied elected officials in Sacramento in an effort to expand financial aid and mental health resources to improve the quality of student life on campus. He also has served as the president of the Educational Opportunity Program (EOP) student organization dedicated to improving the advising experience for first generation students from marginalized communities. During his junior year, Omar was selected to represent CSU Long Beach as an intern in the United States Congress through the Panetta Institute for Public Policy Congressional Internship Program. During his time interning, he was exposed to the day-to-day work of policymaking and learned the huge impact that decisions made in Washington, D.C. have on our daily lives. Omar, is also affiliated with the Delta Chi Fraternity.

Omar hopes to use his prior leadership experience and community involvement to bring about meaningful change at LBSU. As someone who has struggled with mental health, he hopes to use his position to prioritize the mental health of Long Beach State students. As a personal witness to common issues such as college affordability and food insecurity, Omar understands how external factors can impact students. His goal is to create safe spaces for all students and to ensure that existing resources, such as advising and cultural centers, have what they need in order to serve the student body well. He is devoted to revamping student programming to ensure that it is feasible while aiming to unite and revive school spirit.

President Prudencio Gonzalez has an open door policy and encourages all fellow students to reach out to him with any comments, questions, concerns and ideas at Omar.PrudencioGonzalez@csulb.edu.